A cult classic «Catch-22» was originally published sixty years ago, but even now, it is considered to be one of the key literary works of American literature. Moreover, different generations view it as one of the most celebrated and the funniest books. It is popular all over the world and people refer to it as a book of all times. Recently, it has got an official status of the “best novel” on reputed lists composed by Newsweek, the Times, the London Observer, and the Modern Library.

Joseph Heller is an American writer who is the author of this satirical novel first published in 1961. He could fancy that it will be regarded to be one of the most remarkable novels of the twentieth century. The setting of the novel is a period of World War II, in the years of 1942 to 1944. The order of the events in the novel is non-chronological and all the things that take place are presented from the perspective of various book characters. The development of the timeline in the novel is not sequential and it changes together with the plot of the novel.

A cult classic «Catch-22» brings the term “Catch-22” into literature. It implies a special literary device in the novel plot with a statement based on paradoxes with double logic. The present-day English language includes this phrase, which means that it is not possible for somebody to escape from a paradox in logic.

This is a story focused on a bombardier Yossarian from the U.S. Army. In general, it is about the squadron of the Air Corps based in Italy in the period of World War II. Captain Yossarian cannot figure out why he is the victim and why everyone is attempting to murder him. When he is on the plane, dropping a bomb, everyone around is trying to shoot at him. His life is at risk and the captain’s senior officials try to advance and get higher ranks. Yossarian gets more and more missions and tasks to complete as per the orders from Colonel Cathcart; thus, he is afraid of dying in some war action. The job responsibility of Doc Daneeka is to let everybody insane to the ground. Still, so a person in the state of sanity would agree to get onto a plane and take part in such challenging missions. It is possible for Yossarian to ask to be considered not healthy to be relieved of his missions. However, it is not that easy. His request to get out of war missions will prove that he is sane. Thus, it will be proof that he can go on with the missions. This is a catch known as Catch-22.

Yossarian looks for every possible reason and excuses to get to the hospital. He pretends to have a lot of complaints about his liver condition. He is trying to look ill not to fly anymore. He wants to prevent any suspicions and he tries to get a fever and convince everybody that he feels terrible.

The novel tells not only about Yossarian, but also about other men from the same squadron. The author shows that their life stories resemble that of Yossarian. Unfortunately, not all of them could survive in the war actions. Yossarian is very careful and he notices numerous cases of corruption in the army. He is also disturbed by the carelessness of the officers and the terrors of the war. He sees a lot of things that make him unhappy and he is trying to maintain his sanity under these awful conditions. He eventually understands that there is no Catch 22. Still, it is complicated to escape it as people do not doubt its existence. His main mission now is to escape his war duties and the question is whether he will be able to do that. 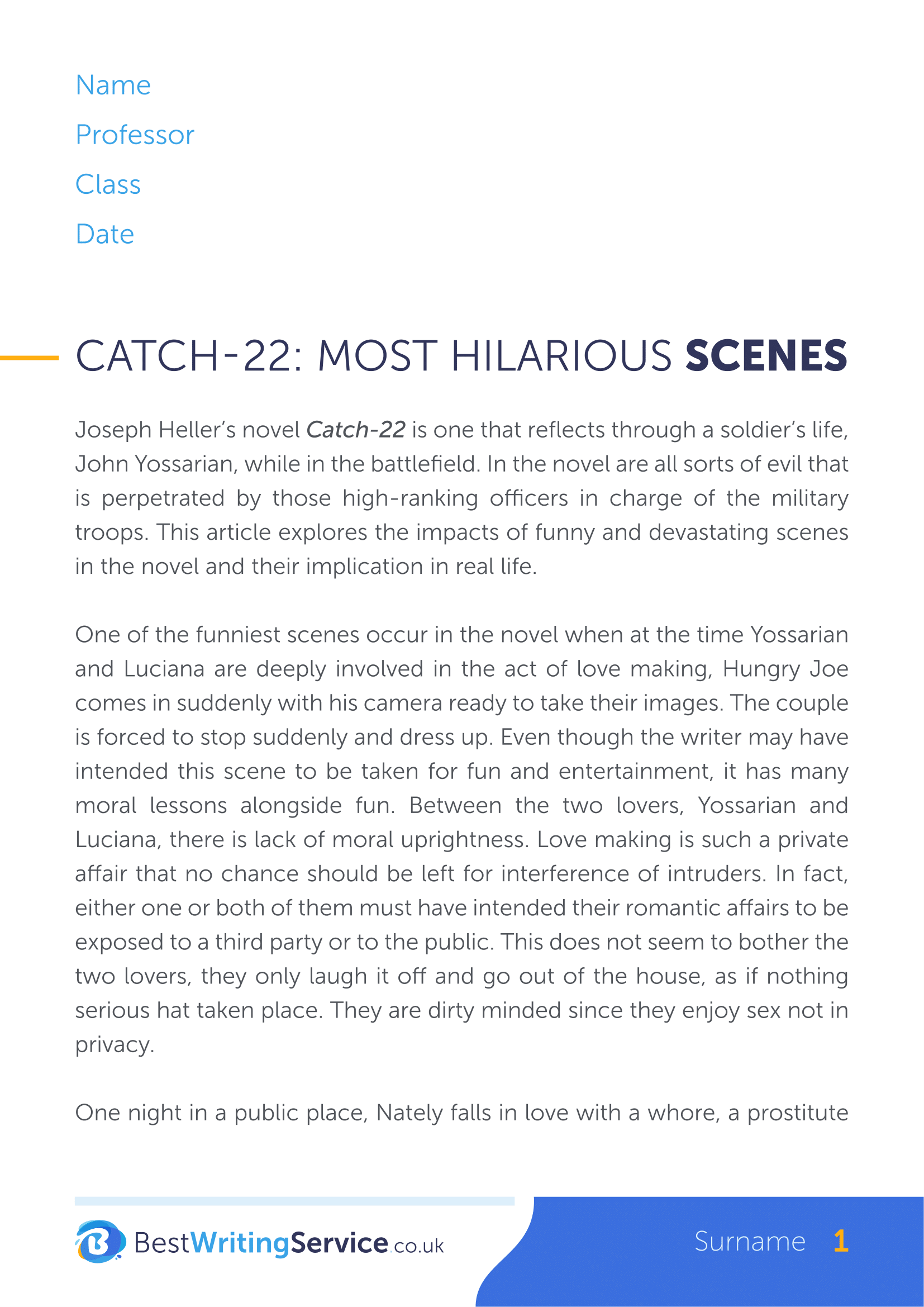 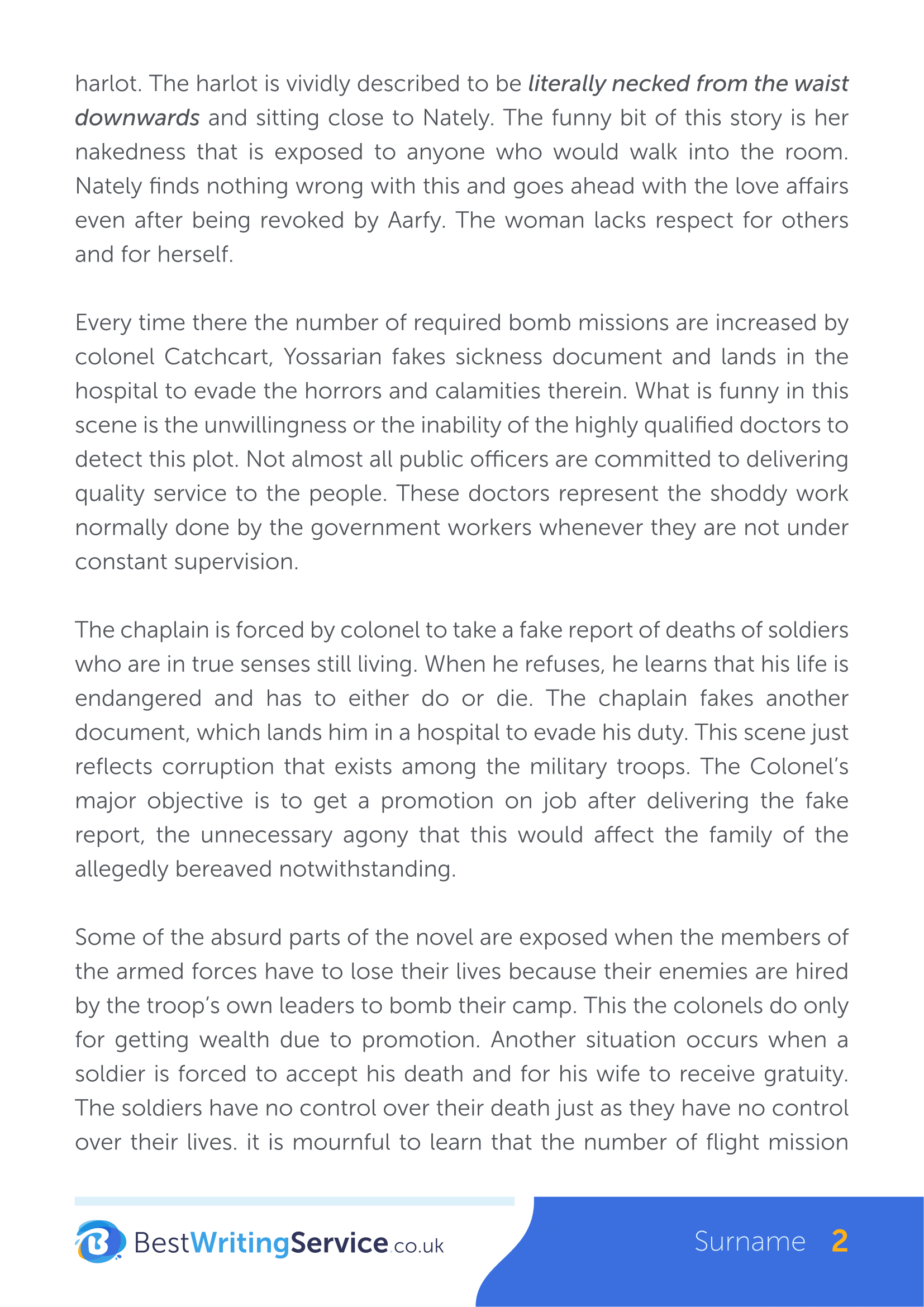 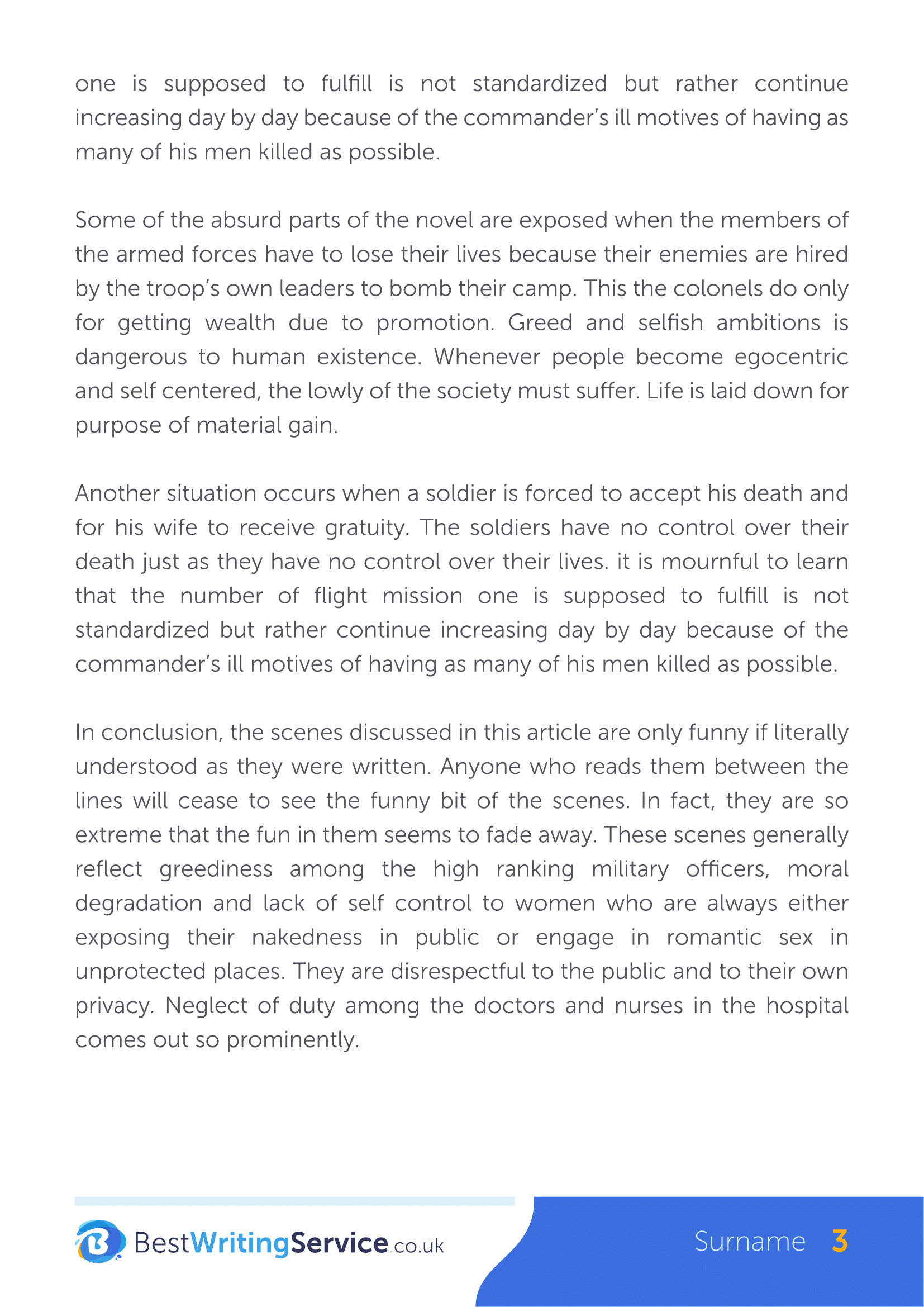 Working on the analysis of a cult classic «Catch-22», you can use this question as the main problem to discuss or you can make use of other suggested topics.

The Easy Process to Buy an Essay